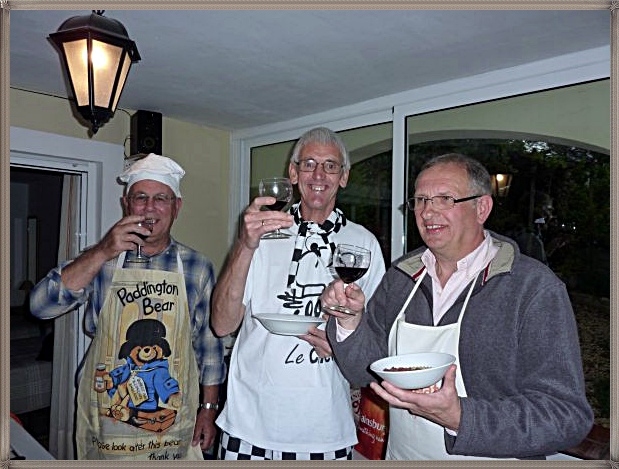 Left to right – John Todd, Stephen Carden and Stuart Walters”
This event was very kindly held at the home of Dave and Chrissie Snell, in La Drova, Barx,   to allow 30 plus friends and neighbours to raise cash for the Franciscan Refuge Transformer Appeal. As well as enjoying an entertaining evening and a nice meal.
Can’t Cook was John Todd, who works in the Charity Shop and Stephen Carden from the Anglican Chaplaincy was ‘Ainsley the chef ‘, Stuart Walters a neighbour,  was Won’t Cook.
As with the TV programme, Stephen showed the guys how to cook a Chilli con Carne, with of course, plenty of prompting from the audience.
After a blind tasting, Stuart was declared the winner.
This fun event raised 135.50 euro
for The Transformer Appeal

You can find out more about which cookies we are using or switch them off in settings.

This website uses cookies so that we can provide you with the best user experience possible. Cookie information is stored in your browser and performs functions such as recognising you when you return to our website and helping our team to understand which sections of the website you find most interesting and useful.

Strictly Necessary Cookie should be enabled at all times so that we can save your preferences for cookie settings.

If you disable this cookie, we will not be able to save your preferences. This means that every time you visit this website you will need to enable or disable cookies again.